You are here: Home / Garbage Disposals 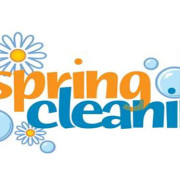 Spring might be the start of warmer weather and longer daylight, but it is also the time of year that you start sprucing up your home. Spring cleaning around the house can entail many different things from getting rid of clutter to giving your plumbing system a good look-over. If you haven’t gotten around to it yet, there are a few ways you can easily improve your plumbing system this weekend.

Here are the best spring cleaning tips for your plumbing system:

Try Out Your Sump Pump

Spring is known as the season that brings on the rain. This is especially true for most of April and May. It might be a good idea to check and see if your sump pump is functioning properly now to ensure that no big problems arise later. A great test for your sump pump is to see how dry it keeps your basement on rainy days.

Not only can leaky faucets cost you money, but they can also be incredibly annoying. Instead of just dealing with leaking and dripping faucets, it is time to fix your leak. The wear and tear that a leak can put on your sink basin and faucet isn’t worth it. Fixing a leak might not be fun, but this is one project you need to take on this spring.

Chances are you haven’t splurged for new fixtures or faucets in a long time. Why not give your plumbing system an update with new fixtures that affordable and stylish. You can even purchase more energy efficient fixtures that will help you cut back on your energy bill.

Be Prepared By Installing a Flood Alarm

As a homeowner, you always want to be prepared for the unexpected. Having a flood alarm in your home is a preventative measure you can take to prevent flooding. This type of alarm will sound when it comes into contact with water. This means that you can limit the amount of water damage that occurs in your home.

It is that time of year again, when you will be watering the flowers and caring for your lawn. This means that you need all of your outdoor hoses to be free of leaks and cracks that might have been left behind by the cold weather. Checking your hose takes a few minutes, but you save you a big hassle later on. 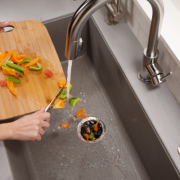 Will A Garbage Disposal Be A Benefit To Me? 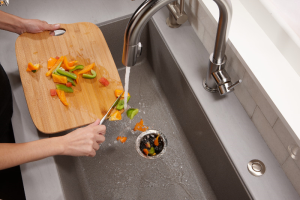 First used only in commercial applications, garbage disposals are now common in most modern homes. One of the few places you cannot use one is where you have a septic system, as the system cannot break down the material fast enough and it will soon stop working. A garbage disposal can take almost all food waste, except bones and stringy fibers like cornhusks and silk.

Installing a garbage disposal – Most modern sinks have a drain opening large enough to fit a disposal, as they are of a universal size and shape. While installing a garbage disposal can be a do-it-yourself job, many prefer to have a plumber do the installation, as the unit is heavy, and the space below the kitchen sink is cramped and dark. The drainpipe and “P” trap have to be removed before the disposal is installed, and then reinstalled after, and an electrical connection has to be either provided, with a power cord or hard wired in an electrical box.

DANGER: Never put your hands into the disposal to clear a clog. Some units will reverse direction each time they start, which helps clear clogs.

CLEANING TIP: Use ice cubes to clear clogs. If they lock up the blades they will just melt and do no damage.

What they can do – You can send just about any food waste down a disposal, except for bones, and stringy things like corn silk and husks. Always have the cold water on full while grinding the waste, and let them both run until it is clear and has a hum. Some units have a

When considering a garbage disposal, and looking for a Knoxville Plumber, we would encourage you to look in your phone book for Knoxville Plumbing LLC and check them out on the internet at https://knoxvilleplumbingllc.com 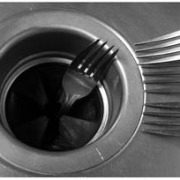 Why Is My Garbage Disposal Not Working? 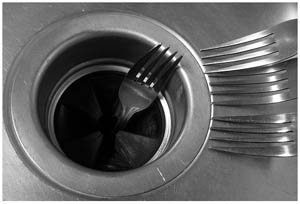 A garbage disposal unit is usually a very sturdy device. It works brutally on the garbage and gets rid of a lot of trash that you would otherwise have to collect in a container and carry it out all the way to the front yard. When you have a sturdy device, it is not expected to malfunction or stop working. But given the kind of task it does, a garbage disposal unit may malfunction at times. When your garbage disposal unit doesn’t work, it is not always the fault of the system or the company that has manufactured it. Often, it is the nature of your use and what you have subjected the unit to which causes the problem.

There are many types of problems that you may come across with your garbage disposal. The device may simply not work, in which case there may be a fault somewhere. The device may just have jammed due to some erroneous use, in which case the jam will have to be attended to. Long periods of activity and not attending to its maintenance are usually the two most common causes of garbage disposal not working.

First, you should never try and check out the garbage disposal unit yourself, not unless you are trained. You should always hire a plumber, one who is trained at fixing such units. Don’t put in your hand or try anything experimental to know more about the problem. Your garbage disposal unit may just have jammed due to periods of use and owing to the buildup of sediments. Garbage disposal units can crush a lot of stuff but that doesn’t mean you can crush anything down the unit. Glass, hair, grease, rags and similar materials that are hard to get rid of and can jam the unit are the most common causes of a malfunctioning garbage disposal system.

The entire unit going kaput is unlikely. What you should do is turn off the system and call in a technician. A technician will attend to the device, inspect it, find the problem and offer you a solution. It usually doesn’t happen that a garbage disposal unit is beyond salvaging or repairing but if that happens, then you have to replace it with a new one or another old one.

You should try and use a garbage disposal unit according to the best practices. That will avert almost all potential problems. 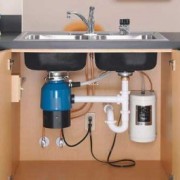 Do You Need a Garbage Disposal?

Making minor updates in your kitchen can not only make it more convenient for you, but also help you cut back on your waste. Installing a garbage disposal is a great way to make your kitchen more environmentally friendly. Having a garbage disposal installed underneath your kitchen sink is easy and affordable for all homeowners. This handy gadget works by grinding uneaten foods into miniscule pieces that can be passed through the sewage system. This makes an impact because it cuts down on the amount of waste that is disposed of in landfills.

Cut Back on Cleaning

A garbage disposal is so recommended, because it offers numerous benefits to homeowners. This kitchen appliance will come in handy on numerous occasions. The amount of time that you are forced to spend cleaning can be greatly reduced by simply having a garbage disposal installed. Now you do not have to spend tedious time moving between your trashcan and your sink scraping of plates. You can simply stay in one place and gently scrape all food from your plates into your sink. This makes clean up after each and every meal so much simpler. You will be amazed by how much time you can save by making such a minor adjustment in your cleaning routine. Operating your garbage disposal is also designed to be easy and only requires you to turn on a switch.

Impact the World You Live In

Not only will the installation of a garbage disposal make your cleaning routine simple and fast, but it will also have a positive impact on the world. This can be done by cutting back on the contribution of waste that you add to landfills. Sending your waste down the sewage system is ideal to having it lay in landfills around the world. Food waste accounts for about 20% of the total daily waste for every household, but having a garbage disposal installed in your home allows you to cut back. Reducing the trash that you send to landfills is a wide reaching benefit that a garbage disposal gives you access to.

No Inconvenience Associated With Noise Levels

If noise concerns are what is holding you back from having a garbage disposal installed, you can let go of your worry. Our garbage disposals are specifically designed to create only low noise and are a convenient kitchen appliance for any home.